They are the Cult of the Secret Samurai. They like lobster soup. But who doesn’t. They are four. Maybe they eat potatoes. At least one of them is a serious weirdo. What about tomatoes?  One of them likes sizzling snake sounds. Spinach. One likes round shapes. No food here. The last one plays with her breath. And they don’t like corruption. Or evil. They are also electro pop performers, jazzists, joyists, good mooders, great spirits that are, in their own words, “combining the near-impossible to grasp allure of Nordic mysticism with a healthy dose of sex and nonsense”. So far they managed to introduce Melody to Beats and after intense, soul touching love making of the two, the Song was born! So melodic, so playful, so yours. Yep. 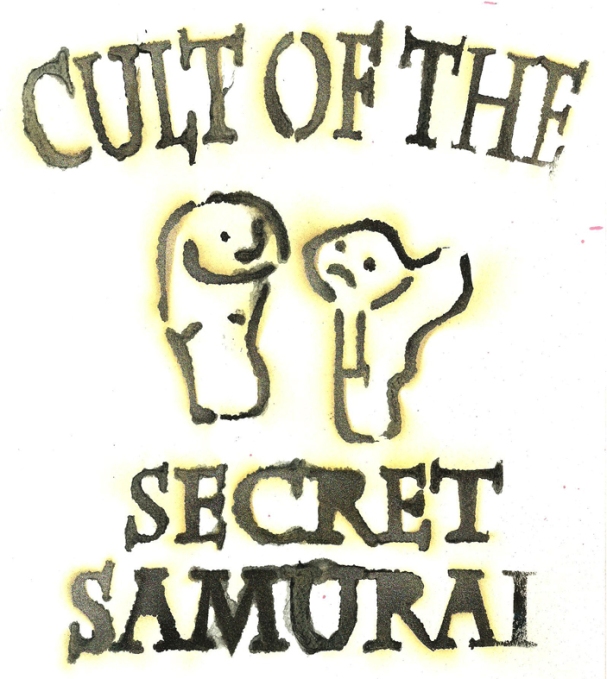 I would love to call them the Icelanders in the Hague but the truth is that only two of them, Ægir Þór Þórðarsson and María Magnúsdóttir come from Iceland. Still exotic. As Maria told me one evening in Libertijn while it must have been snowing and the reindeers were sitting at the table next to us, “Iceland is small and if you have friends you get to the right places!” Maria is the one that likes hissing snake sounds. She is using them to exercise her voice. Let’s pause here and hiss. Hiiissssssss. Hiiiissssss. Hiiiisssssss. And this is the outcome:

Ægir. The weirdo. They never said it but he has the charisma of a front man. Apparently he is the alpha male counter parting Maria’s sensuality. It wouldn’t be a surprise to see him giving a standup comedy performance but until he does so he will probably continue playing his semi-acoustic guitar (the story says he got it from a bum in exchange for some crack cocaine) and his looping pedal. Don’t you love looping pedals! It was in his studio that the collaboration with Maria started. Logical question for the end of this short presentation would be this one: How to describe with one word a person that pops up with the following line “Kill them instantly” (and he wasn’t talking about Martians invading the Earth). The weirdo. This is Ægir and he probably likes green:

Sam Van t’ Oever is this good guy. You know the DJ that has stylish haircut, talks politely and has good manners. Hm… In fact, I don’t really know any except Sam – the good mannered disk jockey with the full time job to spin records at Cult of the Secret Samurai’s gigs. In spare time he is studying at KABK. He was telling me about bubbles and awkwardness. This is how he looks like: 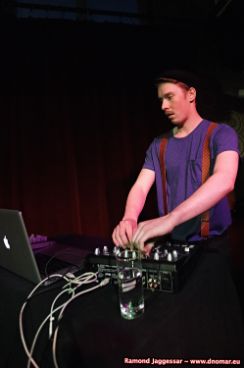 And breath player. In case you didn’t know, it’s a new way to say saxophonist. That’s Leonie Freudenberger, the girl next door. Her biography tells me that she would have been a geek, if only she decided to go for math instead of notes. This is her. With the saxophone in her hands, of course. 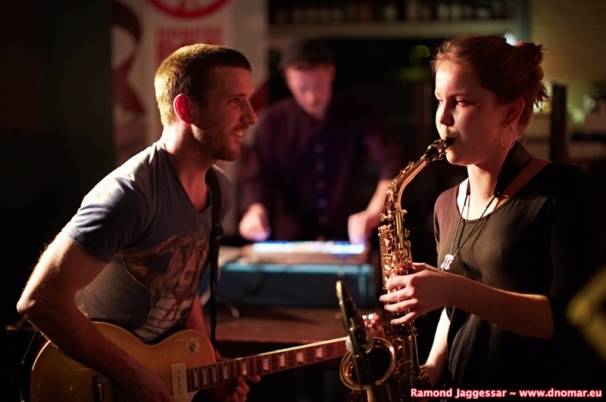 So yes, they are Cult of the Secret Samurai. The only thing I still have to explain is the name of the band and I don’t really know what’s behind it so I’ll give you my own explanation. The story goes like this: Ægir was looking for people to join the band. Even though the musicians didn’t even know each other at the time, the idea was so insanely good that it became an instant CULT. And since no one knew about it as the band wasn’t there yet, it was a SECRET cult. So at the time, you really had to be a SAMURAI to see it.

And the rest is the legend. Parts of it I’ve been told in a little café, called Libertijn, one cold evening in February when reindeers were sitting next to us. I was hoping the background music wasn’t too loud and their vibrant energy would still be saved on my recording.

MAGPIE (MP): WHERE ARE YOU COMING FROM?

Maria (M): We all come from different directions, we all bring something different. The current sound comes from Ægir’ dungeon studio where he was making music, on the ground floor of his home. We met, he dragged me into the studio and the sound we have now is collaboration of melodies and harmonies on top of the beat. Sam gets the material and plays with what we have made and Leonie comes on top of it and makes this atmospheric saxophone sound.

MP: WHERE ARE YOU HEADING?

M: Since last year, we play as much as possible. This year we released our first video Sodom and at the moment we are mastering sound to go further with our music. We have two EPs so far, not formally released, that we sell at concerts.

Ægir (Æ): Every cover of the EP is a unique art piece. We make them ourselves, the logo and typography are stenciled and then we stich everything together. We want to continue in that direction – if you buy an EP, you get your own art piece.

M: They are handmade! 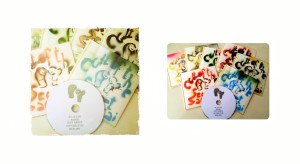 Æ: More and more music is online, you download it and you stream it. You listen to grooveshark or soundcloud  but it’s also nice to have something made by the band that you can touch and feel. This year we started working with the producer, for the next few months we will be in the studio, mixing and mastering our songs.

MP: DID YOU ALREADY CHOOSE YOUR FUTURE LABEL?

M: That’s the plan, to look for a label that is interesting and believes in us.

Æ: I think that the labels are looking for us (NB: laughter). However, we will always be in charge of the music produced. Do it like this or that – that’s not going to happen. It would be nice to have a label or booking agency that can push you, book you and promote you!

MP: IS YOUR NEW VIDEO GIVING YOU FAME?

M: We don’t feel it. It’s not like – oh, we are popular! I just hope more people will hear our music.

Æ: Last weekend I was filming for a friend of mine at some art event. And someone approached me saying “Hey, I know you, you are the guy from this band Secret something…”. “Yes, that’s me!” I replied. (NB: laughter). But true, we don’t really feel it. YET!

M: We would like to play outside of The Hague a bit. We were in Paard café, at Haagse Popweek, De Vinger, in Supermarkt twice, at Oh Oh intro festival. And we were also named “band of the month” by 3voor12! That was great!

Æ: And we had concert in our living room. That was really a good concert. There is a group from KABK called “In your living room” and every three weeks, or once a month, they organize exhibitions or happenings in each other’s living rooms. (NB: Magpie would love to do a photo story on that one!) 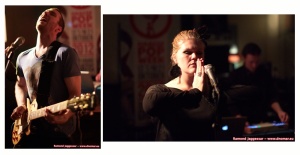 MP: HOW IS THE HAGUE TREATING YOU?

M: It’s different being a student here than, for example, an expat. It affects your social life. When you are a student, social life comes along.

Æ: Especially if you are in art school.

M: I tried to work, tried expat meeting, but I was lost there.

MP: WHAT IS YOUR EXPERIENCE WITH THE DUTCH?

M: They are friendly. People find them super rude, but I find them like us, like Icelandic people. They are cold like us, so that is good! (NB: Maria is contagiously laughing)

Æ: There are definitely similarities between Dutch and Icelandic people.

M: Except that Icelandic people would never yell what you should do better when you bike pass – “You are not supposed to be on that side, what’s wrong with you!” (NB: Maria is imitating imaginary biker in a high pitched voice) 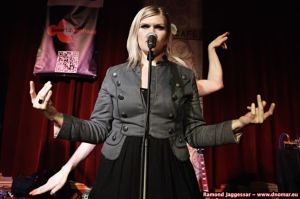 MP: AND WHAT ABOUT FOREIGNERS?

SAM (S): They just seem Dutch to me. I don’t really see the difference!

MP: IF AN OUTSIDER WOULD TRY TO VISIT YOUR ARTCISTIC BUBBLE HOW WOULD YOU REACT TO THAT?

Æ: Kill them instantly! (NB: Laughter) I am very welcoming!

M: It’s not in my nature to approach people but if they would come to me I would be like – Hey, yeah, nice!

S: It depends on a person. A lot of people could feel, I don’t know, a little bit awkward. A typical person would visit places we visit – typical art student – outsiders don’t feel comfortable in that kind of environment.

Æ: I think I am friendly and inviting. But then again, I do a lot of different things. I train judo, and study art and have a lot of different jobs so if a friend of mine that trains judo would come to an art party in 1646 he would just be like – Wow!!! (NB: laughter) What do you want to achieve by gluing towels on the wall. Why would you do that!! And an artist would say – It’s the glue that makes us stuck, for example. 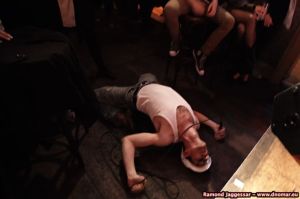 THE HAGUE PATH AND WRONG TYPE OF SNEAKERS

M: I would explore the booming jazz scene with them. The whole week there are so many jazz clubs, and that’s basically the social life of the people in The Hague. And then we would visit jam sessions afterwards.

Æ: Yes, in the Kikker, the Pater, and Murphy’s Law

M: And I would take them somewhere nice to eat.

Æ: No, I would cook for them, lobster soup. (NB: We might get a hold of Ægir’s recipe)

M: Then we would go to jazz clubs and later on dancing in Supermarkt or Paard café.

Æ: Or we could go to an opening at 1646. That’s a gallery that is very often showing kind of bizarre things and it has very nice atmosphere during openings. It’s the art scene of the students of KABK and some of the artists in The Hague. It can be very interesting to go there. It’s kind of underground, secret. It’s pretty hidden but very conceptual. A lot of times it’s a complete bullshit but I can enjoy things that are complete bullshit. Then there is also West gallery and the Nest. If you really want to be cultural, you can go to these places during the day and then to jazz clubs later on. And if you are not cultural then you will be really bored in 1646.

M: That’s what we do. We go to exhibitions and listen to music. One time we tried to check out the Plein.

Æ: They didn’t let me; I was wearing wrong type of sneakers.

Cult of the Secret Samurai has a new single that is out now. And you have the unique chance to download it HERE. After that head HERE to get your daily dose of weirdos you already like! They are awesome!

2 thoughts on “The Weirdos You’ll Love”