This city never sleeps! And neither will you, especially not tonight when you are invited to spend “An evening with Jiri Kylián”. Nederlands Dans Theater (NDT) is opening the new season with 4 fabulous modern dance pieces tailored by the one and only master of movement and one of the most influential people in the history of the Nederlands Dans Theater, Jiří Kylián.

As the biggest fan of Kylián’s work, I’m suffering greatly for not being able to see the dancers in action on the premiere night, this Thursday, 26 September. However, busy schedule will postpone my pleasure to one of the future performance in the days to come. There are five more performances scheduled for 27, 28 September and 3, 4, 5 October.

The programme features “Vanishing Twin“, “Tar and Feathers”, “Claude Pascal” and “Click-Pause-Silence”, works made between 2002 and 2008 which was the most defining and crucial period in the oeuvre of Kylián. You can excpect illuminated, mysterious, sharp, poignant, emotional, highly poetic images that are dealing with subjects such are harmony and displacement or life and death.

Vanishing Twin was inspired by the medical phenomenon happening during the pregnancy when one foetus displaces the other until the latter disappears completely. Kylián tried to depict temporariness, suppressed emotions and the dark side we all have but refuse to reveal.

Tar and Feathers sees three men and woman on stage. They wander through surreal world, rambling between sub-consciousness and consciousness. Pianist Tomoko Mukaiyama plays her rendition of Mozart on a huge grand piano. This ballet takes its inspiration from Beckett’s What is the word which was the last poem the Irish author wrote on his deathbed. 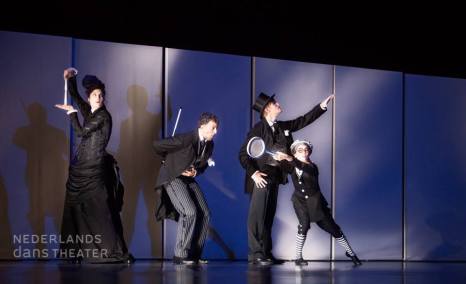 Finally, Click-Pause-Silence deals with encounter and leaving. It was made for the departure of one of NDT’s leading dancers Elke Schepers.

These four ballets tell the subtle story of Kylián’s genius in the best of the ways. Something can hardly be more beautiful, fragile, poetic…