I had to think a bit how to start this one, mainly for two reasons. First, you might have noticed it’s real autumn here with lots of rain, a little bit of wind, chilly but not freezing temperatures and yellow/red leaves that are falling on the ground. Romantic. And homey. And perfect for comic books reading! And since the thought of comic books is already in the air, let me remind you they are often associated with superheroes.

Although this event has nothing to do with superheroes, it is somewhat connected to comic books and it is happening in the autumn. This Thursday, French writer Benoît Peeters will talk about graphic novels Les Cités Obscures (Cities of the Fantastic) he created with Belgian comic artist François Schuiten. Their fantastic world consists of independent city-states inhabited by humans, that each have developed their own civilization and distinctive architectural style.

Benoît Peeters will share his presence, wisdom and imagination during a lecture organized as part of The Knight’s Move in Stroom gallery. He will talk in English (not French, not Dutch) about Les Cités Obscures, architecture and urban planning. To have a taste of what this lecture will be like, read a bit on his work in the article Obscure Cities On The Other Side Of The Sun, published on the website The Pop Up City. 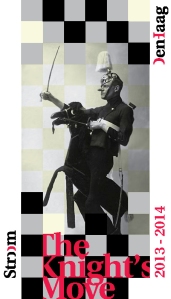 The Knight’s Move is a series of monthly lectures by international speakers whose work connected to the city, urbanity, public domain and community is distinctive, inspirational, enlightening. “Just as the knight moves in an atypical and unusual way across the chessboard, Stroom Den Haag likewise wants to cut across all disciplines and thus stimulate rethinking the city”.